Scenic's Rediscovery Voyages offer guests the opportunity to sit back, relax, and enjoy cruising pristine ocean waters, from the comfort of the World's First Discovery Yacht.

Ensconced in your spacious verandah suite, you will enjoy all the luxurious amenities of a 5-star resort. From the ultimate Spa Sanctuary to a plethora of outdoor areas and wellness spaces; to your choice of 10 dining experiences and eight bars and lounges; rediscovery of time and relaxation awaits. 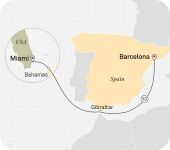 Crossing the Atlantic between Europe and the Americas is a long held dream for many people. Be on board for Scenic Eclipse’s inaugural crossing and follow in the footsteps of the early explorers. 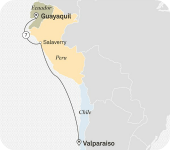 Cruise along the western coast of South America and discover the amazing ruins of Chan Chan. Days at sea allow ample time to relish in all the facilities of your luxurious Discovery Yacht. You may wish to link this voyage to one of our Central American or Chilean Fjords cruises for the journey of a lifetime. 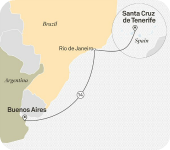 South America to the Canary Islands

Let colorful Buenos Aires and vibrant Rio de Janeiro reignite your passions in absolute luxury and indulgence. You may opt to continue the infectious joie de vivre by cruising across the Atlantic to the Canary Islands. Days at sea beckon with the majesty of time coupled with luxurious and spacious surrounds.

The Canary Islands, also known as the Canaries, are a Spanish volcanic archipelago off the coast of northwestern Africa, are among Spain’s farthest-flung territories. The islands include (from largest to smallest): Tenerife, Gran Canaria, Fuerteventura, Lanzarote, La Palma, La Gomera, El Hierro, and the islets La Graciosa, Alegranza, Montaña Clara, Roque del Este, Roque del Oeste and Isla de Lobos. The archipelago's beaches, climate and important natural attractions, especially Teide National Park and Mount Teide (the third largest volcano in the world), make it a major tourist destination, with over 12 million visitors per year. The islands have a sub-tropical climate, with long hot days in summer and cooler days in winter.

Barcelona – Spain's enchanting capital, second largest and most populous city. It is a huge city that vibrates with life, and there’s certainly not another city in the country to touch it for its sheer style, looks or energy. It is one of the world's leading tourist, economic, trade fair and cultural centers, and its influence in commerce, education, entertainment, media, fashion, science, and the arts all contribute to its status as one of the world's major global cities. Barcelona is home to masterpieces of many great architects – the most famous of which is Antoni Gaudí.

'Astro' Travel Will Have You 'Seeing Stars'

International Dark Sky Week, held during the week of the new moon each April,...

The Hidden Beauty of Portugal is Calling

The Soul of Portugal